Our Future is on Fire So as Amazon is!

Amazon is the world largest tropical rainforest also known as Amazon jungle. The majority of the forest is locate in Brazil, with 60% of the rainforest follow by Peru with 13%, Colombia with 10%, and with minor amounts in Venezuela, Ecuador, Bolivia, Guyana, Suriname and Guiana. Amazon is the lungs of our Earth by producing 20% of the Global oxygen supply. 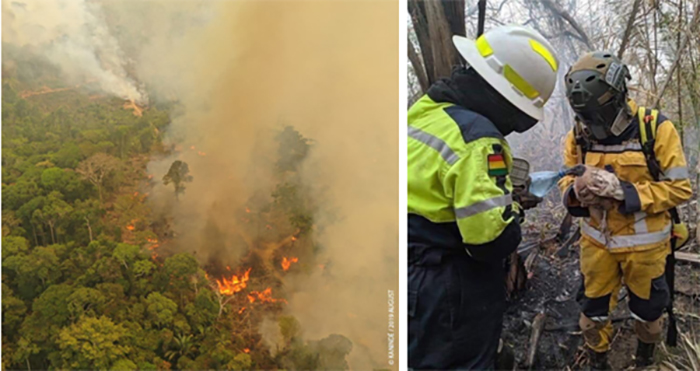 Since two weeks and more days it has been burning & still going. An alarming cluster of wildfires broke out which caused vulnerable position for the amazon’s rainforest as well as its inhabitants as Amazon consists of homes for tribal indigenous people along with various species of animals & plants. It’s an area with torrential rain that almost never burns on its own, yet the blazes have burned for more than two weeks, growing so intense that they sent smoke all the way to São Paulo, Brazil’s largest city.

The ecological and environmental fall out is overwhelmingly bleak. The Amazon provides 20% of the world’s oxygen – Our Environmental resource is in a phase of massive lose. When our global environment in the midst of a climate emergency. More than 21,000 square miles of forest have gone up in flames in Siberia this month, putting Russia on track for its worst year on record for wildfires. Also, the smoke from these blazes shrouded large parts of the country, including major cities like Novosibirsk, and has crossed the Pacific Ocean into the United States.

How The International Community Has Reacted for Amazon

The European Union has reacted sharply to this development. French President Emmanuel Macron called for G7 leaders to discuss the environmental crisis in Brazil at a summit this weekend in the French coastal resort of Biarritz. Both France and Ireland threatened to oppose an EU trade deal struck in June with a regional South American bloc following Brazil’s response. The French president’s office accused Bolsonaro of lying when he downplayed concerns over climate change at the G20 summit in June.

British Prime Minister Boris Johnson tweeted that the fires were “not only heartbreaking, they are an international crisis,” while a spokeswoman said Johnson would use the summit to call for a renewed focus on protecting nature.

A tract of Amazon jungle burns as it is being cleared by loggers and farmers in Novo Airao, Amazonas state, Brazil August 21, 2019. REUTERS/Bruno Kelly

France and Ireland said on Friday they would now oppose the EU-Mercosur farming deal struck in June between the European Union and the Mercosur countries of Brazil, Argentina, Uruguay and Paraguay.

In a release Thursday, Greenpeace said that forest fires and climate change operate in a vicious circle. As the number of fires increase, greenhouse gas emissions do too. This makes the planet’s overall temperature rise, the organization said. In addition, as the temperature increases, extreme weather events like major droughts happen more often.

“In addition to increasing emissions, deforestation contributes directly to a change in rainfall patterns in the affected region, extending the length of the dry season, further affecting forests, biodiversity, agriculture and human health,” Greenpeace said in the release.

A new poll has revealed that 85% of Brits are worried about climate change, with the majority believing that the UK should bring all carbon emissions to net zero more quickly than by the 2050 target announced by the Government.

While there are certainly natural phenomena that cause wildfires, such as lightning, a NASA study says 84% of wildfires are caused by human carelessness. It doesn’t take much, either -a campfire, discarde cigarette or errant firework can be enough to trigger a huge blaze. Even all terrain vehicles (ATVs) can be a wildfire risk, because the hot exhaust can ignite dry brush.

What’s the Connection to Climate Change?

Protecting the Amazon is often toute as one of the most effective ways to mitigate the effect of climate change. As per source information the ecosystem absorbs millions of tons of carbon emissions every year. When those trees are cut or burned, they not only release the carbon they were storing, but a tool to absorb carbon emissions disappears.

“Any forest destroyed is a threat to biodiversity and the people who use that biodiversity,” says Lovejoy. He adds that “the overwhelming threat is that a lot of carbon goes into the atmosphere.” 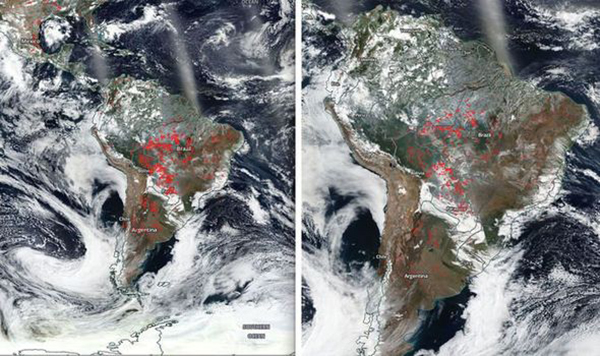 Muelbert says it’s too early to calculate how much carbon might be emitted by this August’s wildfires. The Intergovernmental Panel on Climate Change released a report earlier this month saying the world doesn’t have forest to spare if it wants to avoid the worst impacts of climate change.

“It’s a tragedy,” Muelbert says of the wildfires, and of the deforestation behind it.

How Did The Public Respond?

#ActForTheAmazon began trending on Twitter and protests began. In Zurich, activists from the Klimastreik Ecological Movement and Brazilians assembled outside of the Brazilian Consulate on Friday morning. In Dublin, the Extinction Rebellion Collective occupied the Brazilian Embassy. Twitter users captured images of a protest in Barcelona as well. Demonstrations have also begun in Paris, London, Madrid and Copenhagen, Denmark.

How Can You Help?

Here are some ways you can aid in protecting the rainforest: