Printed Books or E-Books? The choice is yours! - Century Media360

Printed Books or E-Books? The choice is yours!

As always the definition – A book is a medium of an ‘intellectual object’ for transcribing information with protective covers. It is composed and bounded in many pages in the form of alphabetic texts or images.

Whereas, an E-book is an ‘object of digital form’ of books that are readable on flat panels. It gets displayed on computers or any other electronic devices like laptops, tablets, and smartphones.

It was around the 14th Century when the first industrial age of moveable printing pressed was formed. The invention was done by Johann Fust, Peter Schoffer, and Johannes Gutenberg. The process underlined by a set or group of alphabets of ‘type blocks’ made of words and sentences.

However, they were in all reversed form. The inked block is placed on the sheet of paper and passed through a roller. The ink thus gets transferred onto the paper and that made the letter appear printed. Eventually, in the beginning, these were operated by human hands.

Later, as the time drifted by, other forms of steamed-powered printing press started. They are electronic, automated with faster results of printing without the usage of hand operating.
Whereas, E-Book is also known as Electronic Book. It was firstly automated by a lady named Angela Ruiz Robles who was a school teacher by profession. She thought that the students do not need to carry whole different books and textbooks to school.

It was her idea which was designed into a spool that was operated by compressed air. In the year 1949, she made the first prototype. Yet, her project of this automated reader was not picked-up for mass production.

Later, in the year 1971, a student at the University of Illinois named Michael Hart started with digital platform texts. He started typing text on the computer that included The Bill of Rights, The American Constitution, and The Christian Bible. Thus this started the generation of Electronic books.

Existing Way of Talking About Books!

Michelangelo at the age of 87, once said – “I’m still learning.”

Books are often a mirror of the author’s imaginations. A great author will portray the character in such a way that the reader can relive the character exactly in their own imaginary minds.

With the rising population in this 21st century, the evolution of the books and the writing style has also transformed. The transformation of books forth earlier printed books to now has made us stop and look at it from different point-of-view.

Book lovers are already taking their steps further and debate on the evolutionary overviews. The on-going traditional printed books vs electronic display books is an exhaustive debatable topic.

The Digital Forum of Books!

It was the year 1980 when the copy of the first digital book appeared. The book was about Academic American Encyclopedia with a plain version with text on a CD.

The new generation is getting involved with the electronic version of the publishing format. It is still a struggle for the authors and publishers to be accepted on this path.

But, with the release of Amazon Kindle in the year 2007, it has changed the whole course of reading. E-reading devices’ have got into a new paved path because of their affordability even. Thus, this made the attractiveness of it, broader in the audiences. 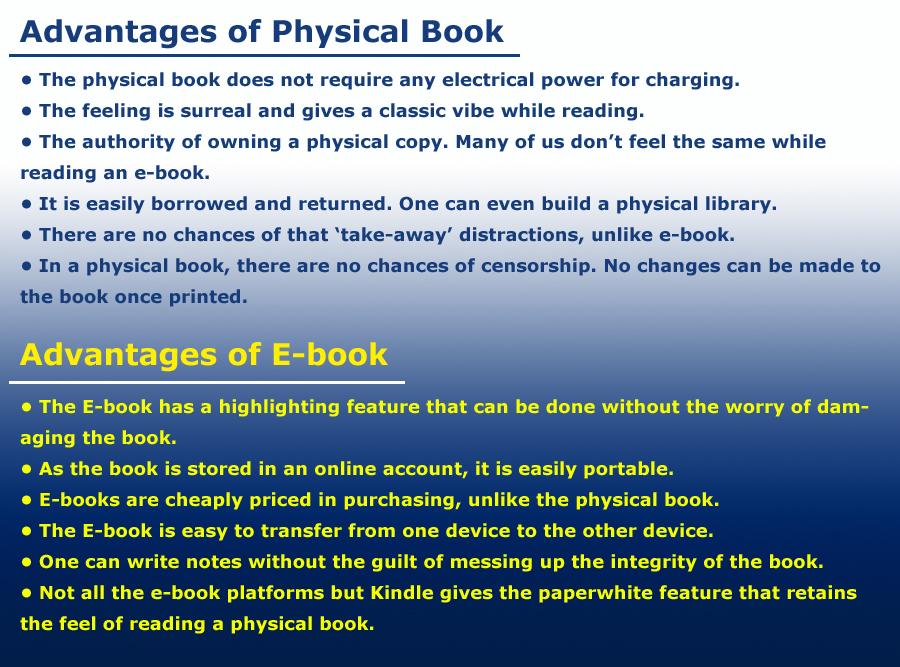 Final Word – Every book tells stories with a wide range of issues to glimpse on, decade after decade. There is always an unspoken competition in the book market to catch the attention of the customers.

The next edition of competitions is about the preferences about physical or digital books. It is totally upon the readers. There are a lot of us who prefer physical and tangible books. While there are a lot of people who like and want to transform their reading habits into e-books. Who knew the on-growth and technology will bring us in this phase.

The changing habitat of evolution of books for reading is totally upon YOU! So, tell us which way of books would you prefer?