Augmented reality(AR) is a technology that allows the user to experience the physical world, with computer-generated digital information. Like virtual reality, AR adds layers of virtual input. But unlike VR, AR only adds some virtual information without creating an artificial environment to replace one. It creates some input ranging from sound to video, graphics to GPS overlays, and more in digital content which response in real-time. It involves technologies like S.L.A.M. (simultaneous localization and mapping) and depth tracking.

4 types of Augmented Reality are –

This science-fiction idea was rooted in 1901, although the term was first introduced in 1990 by Thomas Caudell. Louis Rosenberg’s complex Virtual Fixture comes with a major update of AR in 1992. The ARQuakegame (2000) and the design tool ARToolkit(2009) was the most notable release of AR in the consumer world. But later, Microsoft’s HoloLens in 2015 brought AR belonging to the classical sense, while AR software became popular and affordable.

AR has become more beneficial since it became popular in major brands. Through many key benefits are as follows – 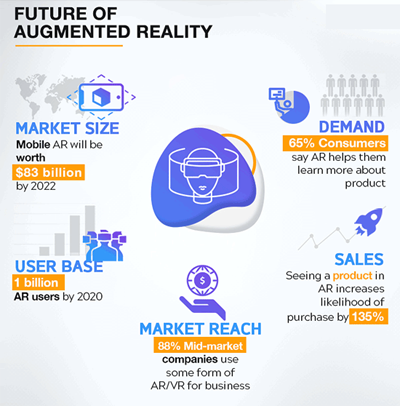 ● AR is available anywhere in the smartphone market including mobiles and personal computers.
● AR increases engagement and interaction and provides a good quality user experience.
● AR is an inexpensive alternative to other media platforms as known as specific media needs to be purchased.
● AR can increase the values of products and brands.
● Brands have access to details analytics, enabling them to truly understand their audience.
● Well-implemented AR converse innovation and responsiveness from forward thinking brands.
● Drive customers in product sales through activating additional brand content.
● Increase engagement and learning by augmenting historical and cultural locations.
● AR activated banker that allows you to check account details as well as the nearest bank and banking facilities.
● Deliver more value to advertisers by offering measurable AR print ads with a direct link to purchase.
● Virtual tour guides for specific city hours with augmented exhibition content for a museum, gallery visitors.
● AR in-car dashboard provides a driver with a range of technical travel in formations.

Augmented reality is the future. The future technology belongs to AR. It adds a layer of virtual information that allows us to take a look at this world differently. Its improved task efficiency and the output quality of user’s experience will be a key takeaway in innovation world.